An Interview with Two of OBS Logistics' Developers for National Coding Week. 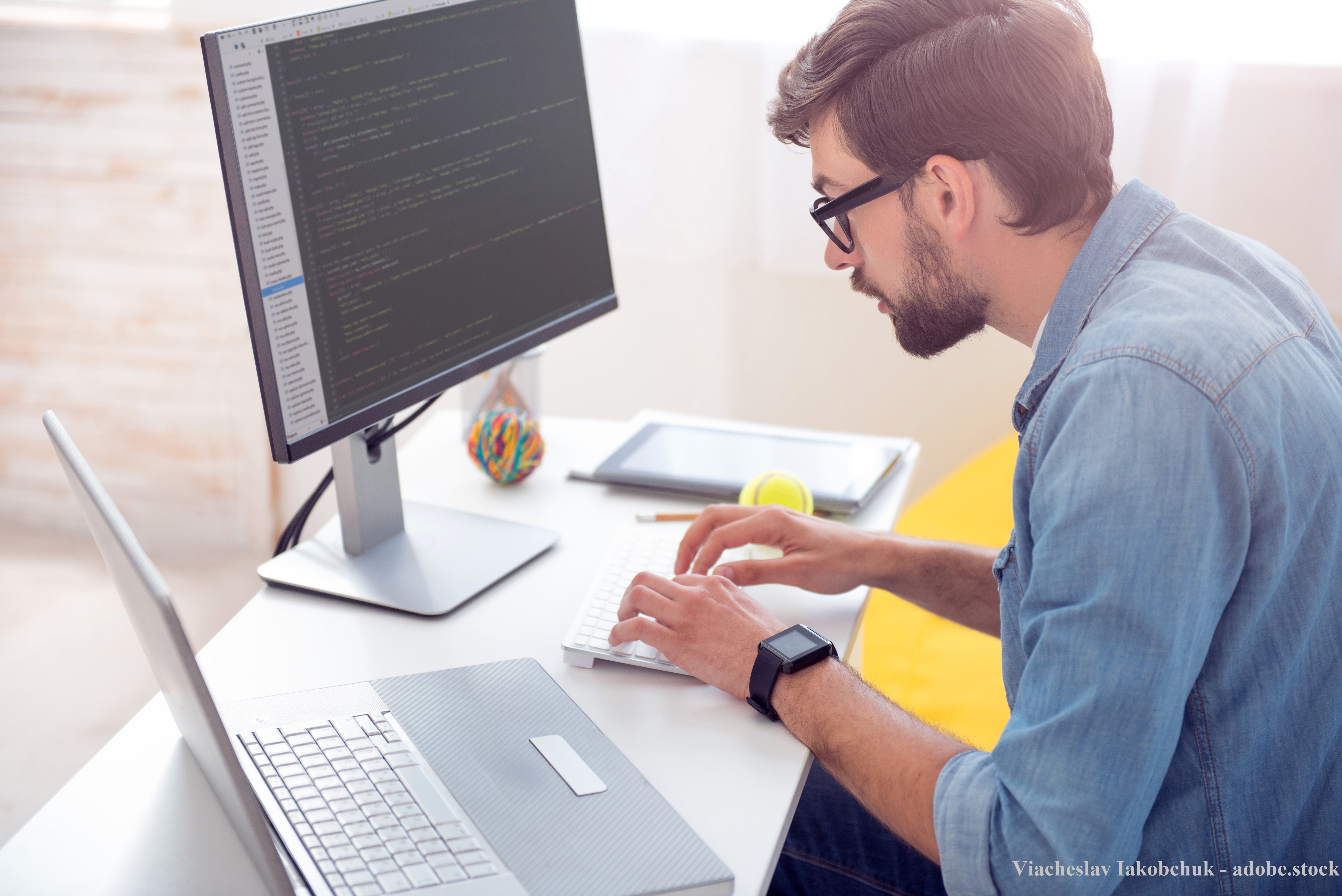 National coding week drives to encourage people to learn digital skills by spreading digital knowledge and awareness. To take part in this, we sat down and interviewed two of our developers who work on our WMS systems, Andrew Holder, who has been with OBS Logistics for 11 years and Jon Brittle who has been with us for 20 years.

In a highly technological role, as a developer what is your favourite part?

AH: When a program is being coded and is nearing completion, I obsess a little and enjoy making the final iterative tweaks so that I know it is well crafted and can feel satisfied that it is the best it can be.

National coding week's aim is to inspire people to learn digital skills, to become a developer for OBS Logistics, in your opinion what are 3 essential skills you need?

AH: I'd say the desire to properly understand what is required (by asking sufficient questions), an attention to detail and being able to independently research and resolve technical issues.

JB: A good attention for detail, a broad understanding of associated technologies and a willingness to learn.

What inspired you to become a developer?

AH: I am a bit of a science fiction geek and have always loved the concept of computers and robots that could be programmed and left to carry out complex and useful tasks whilst unattended.  For example, I particularly enjoyed TV programmes such as the Gerry Anderson UFO series, which had a talking satellite computer (SID) that would announce the arrival of alien craft and give details of their speed etc.

In your opinion, where would the world be without developers?

AH: The implications would be massive as we'd be stuck in the dark ages with everyone having to do boring, repetitive tasks at work and we would not have access to the essential services that we all take for granted. Developers are involved in just about everything; from providing the world with great entertainment, online socialising, shopping, banking, travel the list just goes on and on.

JB: Many Jobs that exist now only exist because developers have created code for new hardware which helps the world advance. Without developers, none of this would exist.

Best tips for getting into a developer/coding job role?

AH: I'd say demonstrate, by example, to an interviewer that you have worked through projects and encountered problems along the way which you then resolved. Problem solving with logical thinking skills are impressive to an employer as they show that you are self-reliant.

JB: Definitely a good attention for detail with a broad understanding of associated technologies, along with a willingness to learn and enthusiasm.

How has coding changed in comparison from 10-15 years ago to now?

AH: There has been a shift to having quality control checks in place at every stage of the development.  For example, an intended programming solution is now specified and peer-reviewed by someone else that knows the requirements, prior to coding. When the design is successfully checked and is proven to meet the business needs, then the programmer can feel secure about the quality of what they are about to code. Also, a lot of what is built now is browser based and the technical aspects for carrying out that style of development must be considered.

JB: Languages have totally changed. We are now able to do many more things and utilise technology that was not even thought of 10-15 years ago. New ways of working have been introduced and the screens currently are much more user friendly than they were.

How has technology/coding changed the supply chain?

AH: Improved coding tools have greatly helped to increase the user-friendliness of systems and allowed enhancements that result in quick turn-around times to the end customer. The processes are much more stream-lined and efficient now and the developed applications include improved management reporting, so businesses can be much more responsive when planning for demand peaks during marketing promotions. Also, the hardware technology has become web based so it is much faster and easier to deploy an application or system enhancements throughout an organisation.

JB: That's a very open question.Technology has changed the supply chain by providing an increase in operational performance, more pick accuracy, higher visibility of orders and stock position. It is now easier to spot potential issues in the work flow.

How do you see coding developing in the future?

AH: I think there will be more 'black box' coding with developers selecting from a menu of pre-built work flow modules and just picking the parts that they need, which will then integrate seamlessly. This will become much more of a system management role rather than a purely technical one.

JB: In the future, languages will evolve to program new technology, technology that does not yet exist.

Do you think coding will ever be obsolete? Or do you see it becoming less in-demand as AI grows?

AH: I think there will always be a need to develop and code application improvements. That is the ever changing nature of business. Even with AI being available to run an operation, there is still a human need to imagine what other possibilities exist. We're a long way off from a machine offering suggestions. Coding may take a different form, but ultimately developers are still required to control the direction the system takes. However, ultimately there will be fewer developers needed as the dominant AI systems emerge.

JB: That's a fair way off, but coding will always be needed. As many films portray would you feel safe with an AI in control of weapons?

On average how long does it take to develop and fit a full Warehouse Management system?

AH: The answer to this varies by the size of business and the throughput requirements. I think I will say it depends. Most businesses will consider themselves as being unique as they have specific ways of working, so varying levels of initial enhancements can be required. It can vary from 2-18 months depending on how the organisation chooses to roll out the system to their warehouses and depots. OBS offer a number of solution options and so can offer the best fit to keep the transition period to a minimum.

JB: Somewhere between 3 months and 2 years, depending on scope. The majority of systems that we implement are phased in rather than all at once in a big bang.

Click here If you would like to find out more about technology and how it has changed the supply chain over the years.